A few situations in which you might use the Call API response include any URL that iOS supports can be opened, such as:

Note: To use Mail links, they must be formatted as mailto://email@address.com

Tip: For a complete discussion on working with interactions, triggers and responses, read Working with Interactions.

To set an Open Link action response to a trigger: 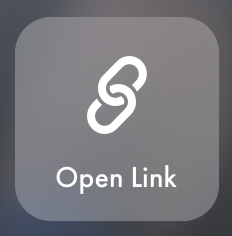 To cancel an Open Link response and remove it from the interaction: